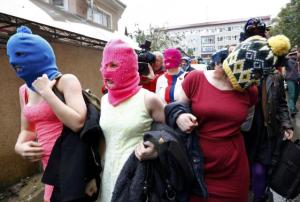 While Russia was prepping for the Sochi Olympics, all-female punk rock collective, Pussy Riot, was using performance art to protest against President Putin. The group’s most famous action was in February 2012 inside a Moscow cathedral where band members danced and played air guitar as their boom box played what they called “A Punk Prayer”:

The action resulted in the arrest of three members of the group, including Nadezhda Tolokonnikova and Maria Alyokhina, who were sentenced to two years in prison. As part of Putin’s pre-Olympics prisoner amnesty, Tolokonnikova and Alyokhina were released in December, two months before their sentences were up. Since then, they’ve been on a U.S Tour including a stop at The Colbert Report.

On February 27th, join Spark for an evening of film and conversation as we explore Russia beyond the glory of the Olympic Games and take a deeper look at the controversial political policies that have been simmering in Sochi.

We’ll be screening the acclaimed documentary Pussy Riot: A Punk Prayer, which tells the incredible story of these young female activists and follows their infamous arrest and court trial.

To get a better understanding of what drove Pussy Riot to such controversial performances that resulted in jail time and hard labor, Spark will be joined by guest speaker Masha Gessen, a Russian-American journalist who recently published the book Words Will Break Cement: the Passion of Pussy Riot. Gessen is a prominent author who is also a lesbian and an outspoken LGBT rights advocate in Russia. After Russia passed two anti-gay laws in June 2013, she decided it was time for her, her partner, and their children to move to New York.

Join us for an evening of insightful film and conversation – the flame may burn out in Sochi but human rights and freedom of speech are not be gamed with as the fight continues for equality for Russian’s citizens.

Being a foodie has its costs. Pork belly may entice you in, but there is a sordid underbelly in the U.S. restaurant industry. Human rights advocate and food justice powerhouse, Saru Jayaraman, is hell bent on changing restaurant employment and labor issues in America. Fighting brutally for the rights of underpaid and harshly treated workers, Jayaraman is a force to be reckoned with. She leads in educating the public on the importance of the treatment of those serving the food rather than the obsession with the grass-fed meat and organic vegetables being served.

Jayaraman’s passion for eradicating social injustices sparked during her childhood as a first generation American. In 1992 she co-founded a national young women’s organization, Women and Youth Supporting Each Other (WYSE). Later her work with post 9/11 displaced World Trade Center workers became the foundation of her latest project, Restaurant Opportunities Centers United (ROC-United). She has been making significant strides towards leading in the food justice movement ever since.

Jayaraman co-founded ROC-United in 2008 striving to improve the wages and working conditions of restaurant employees. One in 10 Americans work in the restaurant industry and ROC-United has led and won 13 major campaigns against high-profile restaurant companies. Seven million dollars was obtained in tips, wages, and significant policy changes for workers as Jayaraman’s triumphs continue to go off like fireworks. Incentivizing restaurant owners to create policy change and workers to speak up against improper conditions continues to motivate ROC-United.

Now Jayaraman wants to talk to you. In her acclaimed new book, Behind the Kitchen Door, Jayaraman uncovers the truth about eating out. Highlighting stories where workers with unpaid sick days equal H1N1 in our food. Her interview on Bill Maher caused an intriguing ruckus when giving a preview of the facts put forth in Behind the Kitchen Door. For the past 22 years minimum wage for tipped workers has been stuck at $2.13 per hour and women with children make up 70% of those earning such a trivial amount. These women serve hundreds of people a day, yet they are poverty stricken, unable to serve their own children at home. It’s statistics like these that give Jayaraman the drive and passion to make a change in this world we all live, eat, and breathe in.

SparkSF is thrilled to welcome Saru Jayaraman at our Investment Committee on June 26. Join us as we look behind the kitchen door and mobilize to create a just restaurant industry. Space is limited. Click the link below to purchase tickets. See you there!

Required Reading for the Social Entrepreneur

Posted on May 9, 2011 by Spark | Leave a comment
By JENN WILCOX
Last week I attended the Echoing Green Big Bold Benefit to celebrate social entrepreneurship

and listen to Echoing Green 2011 finalists give pitches.
As part of the fellowship application process, each finalists was asked which books they consider to be “required reading” for social entrepreneurship. I wanted to share this list, especially as we all work hard to find ways to innovate and build on Spark’s tremendous model.

Every once in a while, I read the writings of someone who makes my mind sing. Those intriguing luminaries that introduce me to ideas and issues I never before considered.  Or those special folks who seem to take my scrabbled thoughts on an issue and package erudite responses complete with 5 point plans.

I call these special people my nerd crushes. END_OF_DOCUMENT_TOKEN_TO_BE_REPLACED